Cameyo PowerTags are arbitrary meta tags that can be bound to Cameyo apps, servers, clusters, users, user groups and/or the entire account. These tags are injected as Windows environment variables during Cameyo sessions. Additionally, a set of config tags allow defining Cameyo sessions' behavior in a flexible way.

Multiple tags can be defined on each line, e.g:

These values get injected into Cameyo sessions as environment variables:

A set of predefined tags allow you to control certain aspects of Cameyo sessions. These configuration tags start with an exclamation mark ('!') Below is a list of the most commonly-used such tags:

PowerTags are dynamic, meaning they can vary from one session to another and take effect immediately, without requiring service nor server restart (the exception being Sticky Tags, described below). When multiple tags exist for a given session (i.e. cluster + server + user + app), the session will be started with the combination of all relevant tags. The order of precedence, from the most prioritary to the least is:

For example, if user has tag 'MY_NAME=John' defined while the server has 'MY_NAME=Server' defined, a session run by this user on that server will have 'MY_NAME' defined as 'John'.

As another example, if the server has tag 'MY_NAME=SERVER' defined while the server's cluster has 'MY_NAME=CLUSTER' defined, sessions will run on this server with 'MY_NAME' defined as 'SERVER'.

As yet another example, if an application has tag 'MY_NAME=SomeApp' while the same global Cameyo account's PowerTag is defined as 'MY_NAME=CameyoAccount' then a session running this app will have 'MY_NAME' defined as 'SomeApp'. 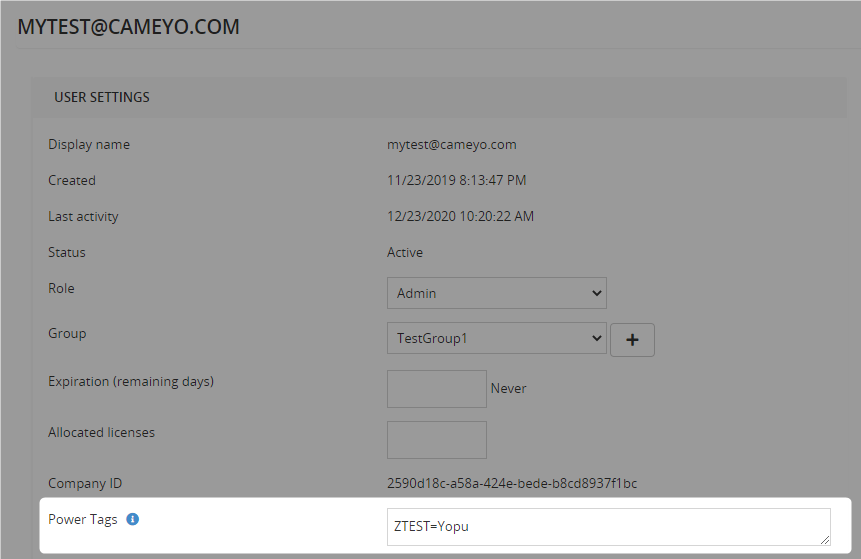 PowerTags are defined per-sessions, allowing high flexibility. If you need tags or environment variables to be defined globally for the entire server (including system processes for example), you can do so by prefixing your PowerTags with a plus sign ('+'). In this case the PowerTag will be defined globally on relevant servers, even outside of Cameyo sessions. For example, setting "+MY_GLOBAL_VAR=Some value" will result in the affected servers having a global system variable "MY_GLOBAL_VAR" with the value "Some value". Sticky tags can only be set for servers, clusters and whole accounts. They only take effect upon server's service start. Removing a sticky server tag that has been added requires setting it to an empty value, i.e: "+MY_GLOBAL_VAR=". It will then be removed upon the next Cameyo service restart and a consequent system reboot (a Windows limitation).

Did you find it helpful? Yes No

Send feedback
Sorry we couldn't be helpful. Help us improve this article with your feedback.